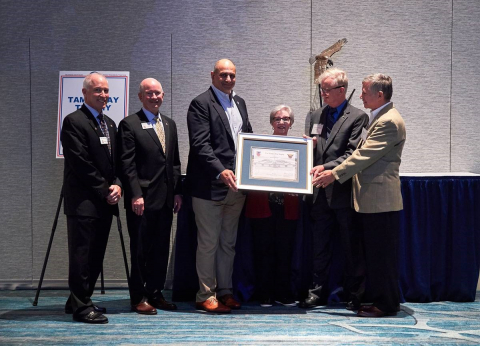 TAMPA, Fla. (Nov. 15, 2019) – The Tampa Bay Defense Alliance (TBDA) is announcing the honoree of its 2019 Tampa Bay Trophy, which recognizes lifetime achievement and distinguished service to the United States Air Force and Air Mobility Command. Ms. Pat Gallagher of Wichita, Kansas, was presented with the 2019 trophy at the Airlift/Tanker Association Convention in Orlando, Florida on Oct. 23.

Ms. Gallagher distinguished herself by exhibiting exceptionally commendable conduct and outstanding service to the Airmen and families of McConnell Air Force Base, the greater Wichita community, and to the United States Air Force. As the Wichita Regional Chamber of Commerce’s military liaison, Ms. Gallagher unified community and business support for the military. She is the energetic, dedicated leader of the Friends of McConnell, a support group providing a notable social and economic linkage between military leaders, McConnell Air Force Base’s Airmen and their civilian counterparts.

“Once again our community has been blessed with outstanding nominees for the Tampa Bay Trophy,” said Tim Jones, TBDA President. “This year’s recipient, Ms. Pat Gallagher from McConnell Air Force Base, was presented at the Airlift and Tanker Association Convention in front of over 650 people in the Heritage Room. The trophy epitomizes the synergy between our civilian and military communities.”

She served as Honorary Commander for the 22nd Air Refueling Wing and earned recognition as a “Golden Eagle” for her outstanding leadership and volunteer service. She played a crucial role in rallying community support for bringing the KC-46, the Air Force’s newest tanker, to Kansas’ south-central region. As a tireless advocate for military personnel and her community, she served on the Air Mobility Commander’s Civic Leader Council, the Kansas Governor’s Military Affairs Council, and Senator Jerry Moran’s Military Council.

The Tampa Bay Trophy was started in 2016 and honors a civilian each year for their distinguished service and contributions to our country’s airmen.

About the Tampa Bay Defense Alliance

The Tampa Bay Defense Alliance (TBDA) was formed in 2012 as an organization to connect military members and civilians. The organization represents an eight-county region in the Tampa Bay area: Hillsborough, Pasco, Pinellas, Polk, Sarasota, Manatee, Hernando, and Citrus. Speaking as One Team with One Voice, TBDA collaborates and cooperates with our community partners on issues of importance to the defense and military communities in our region.

TBDA in the News
373Views